On February 14, 2015, the Hartford Preservation Alliance announced its Ten Most Endangered Buildings List with its HARTBomb Event. These properties are: 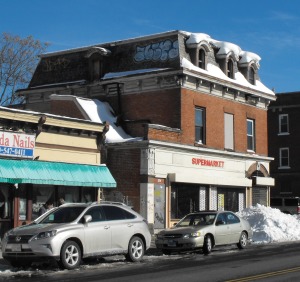 Neighborhood:  Clay-Arsenal
Historic District: Clay Hill
Name: n/a
Style: Second Empire
Year Built: circa 1870
Architect: unknown
This former brewery and tavern is prominently located in the heart of the Clay-Arsenal neighborhood and is a rare surviving Second Empire edifice. The previous owner had an interest in demolishing the building and then turned to demolition by neglect. The City of Hartford now owns the property and will be requesting proposals for development. A preservation minded investor can make use of tax credit incentives and the city’s Façade Improvement Program to develop a mixed-use property.

Note: Urban legend has it that there was once a tunnel from the building’s basement to a brewery located on Fairmount Street (see Hartford Courant “Hartford’s Secret Tunnel” September 26, 1965) 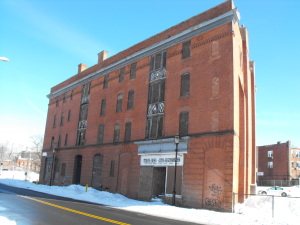 Neighborhood: Downtown
Historic District: Downtown North
Name: Flat Iron Building
Style: Flat Iron
Year Built: circa 1900
Architect: unknown
The iconic “Flat Iron Building” stands forlorn at the intersection of Albany Avenue, Main, High and Ann Uccello Streets. It hearkens back to the time when this section of downtown Hartford thrived with a mix of schools, shops and residences. There is interest in the property but its years of abandonment and neglect put it at risk of being too costly to restore and re-purpose. 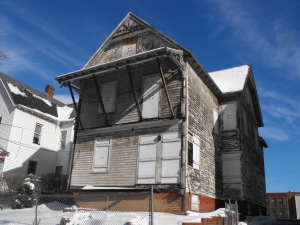 Owners of this property have been attempting to demolish it for over a decade and its condition has been a nuisance to the Frog Hollow neighborhood for just as long. Chances are good that this building will soon need to be demolished for safety issues as evidenced by the weakening foundation that is visible from the street. The demise of 64 Babcock Street is a cautionary tale for greater vigilance over Hartford’s historic housing stock and use of proactive measures, including the use of Hartford’s Blight Ordinance, to prevent demolition by neglect. 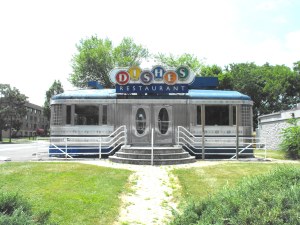 Neighborhood: Asylum Hill
Historic District: Asylum Hill
Name: Comet Diner
Style: Diner
Year Built: 1948
Long vacant, “The Comet” holds memories for generations of area residents. Continued vacancy risks its demolition by neglect. This property needs a preservationist minded restauranteur who can see the value in the building, the availability of parking, its proximity to the Aetna and a FastTrac station as well has its location in an up-and-coming section of Asylum Hill. 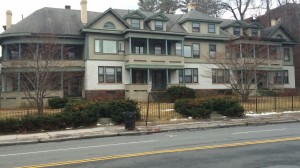 Neighborhood: Asylum Hill
Historic District: Asylum Hill
Name: n/a
Style: Townhouse
Year Built: circa 1910
Architect: unknown
Out-of-state investors purchased this property and evicted the tenants with the idea of demolishing for a chain store and/or surface parking.  Located at a prime location on Farmington Avenue, this property would be best restored to residential use. 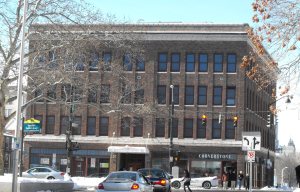 Neighborhood: Downtown
Historic District: None
Name: The Donaghue Building
Style: Renaissance Revival
Year Built: 1926
Architect: R. W. Foote, New Haven
Spared from the redevelopment “clear cutting” of the 1960’s, the Donaghue Building enjoys a prime location across from the Municipal Building and the Library and is adjacent to the historic Stone Bridge. Much of its original architectural detail remains including the iron “marquise” over the entrance door and Tennessee marble trim. A 1930’s WPA mural, once located in the atrium of the Municipal Building now hangs in the credit union. The building is not listed on the State or National Registers of Historic Places but would easily qualify and could be repurposed for mixed use with tax credit incentives. 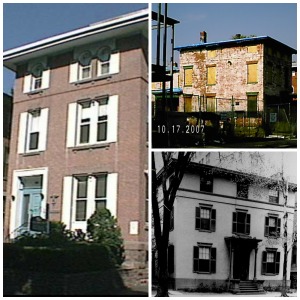 The loss of several mid-19th century buildings within the past 12 months lead us to put all of Hartford’s Italianate buildings on our watch list. One need only look to the “Victorian Lady” of Ashley Street, the work commencing on 53 Wadsworth Street and the streetscapes of Congress Street and Charter Oak Place (just to name a few) to see that this particular architectural style easily adapts to modern lifestyle needs. Predominantly brick, these homes were built to last – and we should continue to be vigilant stewards of them. 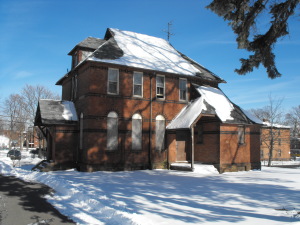 Neighborhood: Frog Hollow
Historic District: Frog Hollow
Name: The Deborah Chapel
Style: Romanesque Revival
Year Built: 1886
Architect: Unknown
This Victorian-era gem was built by the Ladies’ Deborah Society for a chapel for burial services in additional to a residence for the Beth Israel cemetery sexton. The owners have, in the past, requested demolition. It currently remains vacant and is not properly moth-balled for preservation. Demolition by neglect remains a real possibility. 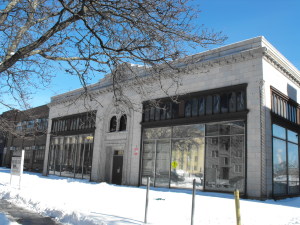 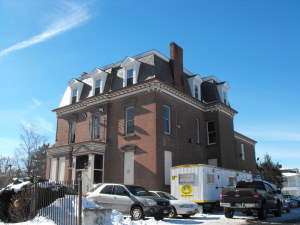 Neighborhood: Frog Hollow
Historic District: None
Name: Samuel Kellogg House
Style: Second Empire
Year Built: circa 1879
Architect: Unknown
Another endangered Second Empire building, the Samuel Kellogg House is one of the last remaining estate houses from a time when Washington Street was referred to as “Millionaires Row.” The parcel is being utilized for its surface parking lot but this once impressive Second Empire residence remains vacant. Deferred upkeep leading to “too costly to restore” looms large for this 19th-century gem.