On February 14, 2016, HPA announced its Top Ten Endangered Properties list at a HARTBomb Event at its offices. They are 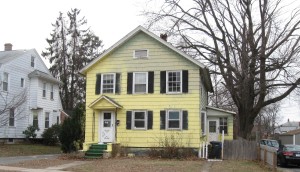 This single-family home is one of only 44 known Hartford buildings built before 1860 that are still standing. It is currently listed on the city’s vacant property list. It is not located within one of our 53 local, state or national historic districts and therefore is not protected from demolition under the city’s Historic Preservation Ordinance.

UPDATE: Jim Newton read the Hartford Courant’s article about our endangered properties and shared his family’s story about 16 Harvard Street. Read about it in our blog post Every Property has a Story to Tell. 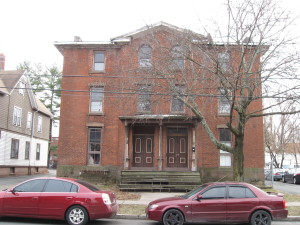 Problems with the neglect of this building go back to the 1990’s. Much of the original architectural details remain including brownstone window surrounds, period doors and porch details. Returning the structure to a double house is recommended. 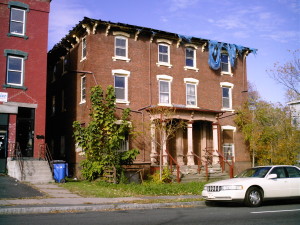 The out-of-state owner’s recent request to demolish this classic Italianate structure has been denied by Hartford’s Historic Preservation Commission but demolition by neglect remains a real possibility. Once filled with majestic architecture, Main Street north of downtown has been ignored for too long, resulting in an overabundance of vacant buildings and lots that put a strain on city services and do nothing to stimulate neighborhood growth and economic development. 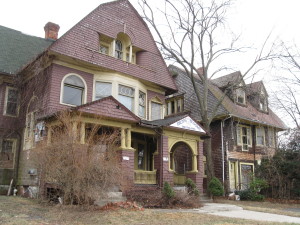 The enchanting Queen Anne residence was built (along with its “sister” at 3364) by the sons of Timothy Mather, a prosperous dairy farmer who owned approximately 1,000 acres in the area. The survival of many of its original architectural details, including windows, porch trim and exterior shingles, make this a rare find outside of the West End neighborhood. Although certainly qualified, this building is not currently listed on the State Historic Register and lacks protection under the city’s Historic Preservation Ordinance – little could be done to prevent demolition or the loss of its character should the owner decide to vinyl side over the exterior and/or replace the windows. 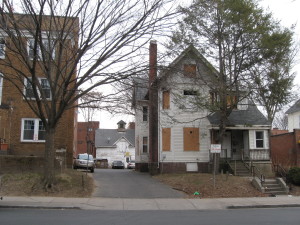 Vinyl siding and replacement windows have erased much of the architectural character of this home. Most concerning is the deterioration of the original carriage barn in the rear. With so few of them remaining it seems short sighted to allow its loss by neglect. Small outbuildings such as these make create artist studios and small retail stores. 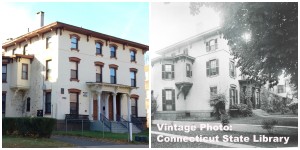 This wonderfully intact Italianate double-house illustrates the beauty and majesty that was once “The Hill” before the development of commercial and apartment buildings. This property was nominated to our list by the Asylum Hill Neighborhood Revitalization Zone. A below average level of maintenance and possible financial difficulties are cause for concern. This was once the home of George Capewell, whose factory building in the Sheldon-Charter Oak neighborhood is being rehabilitated into residential units by CIL. Would that someone would take on this building as well and restore her to former glory 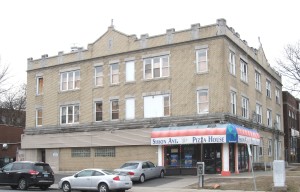 This early 20th century mixed-use commercial building was the lead subject in a 2011 Hartford Courant special report about code violations in city buildings (see Fires, Blight: Vicious Cycle, May 1, 2011 by Josh Kovner). The owner’s refusal to make necessary repairs has resulted in this building remaining vacant (with the exception of one commercial tenant). It is yet another example of the vacant buildings that are beginning to multiply on Farmington Avenue, the most travelled street in the city and the gateway through which workers and visitors travel downtown from the western suburbs. These mixed-used buildings are often the cornerstones for walkable neighborhoods but they need to be occupied and maintained. 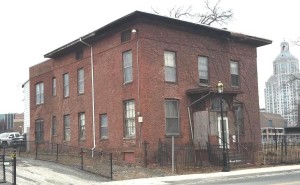 This Civil War-era building was built by merchant tailor Franklin E. Pettibone and escaped demolition last year after concerned citizens voiced their opposition to razing the structure for a later phase of the Downtown North redevelopment project. Given the proliferation of vacant lots in our downtown area, no buildings should be demolished – whether on a historic register or not – until plans are approved and financing is in place for its replacement. The Alliance has offered to the city an alternative plan (see rendering below) for the site the retains the Pettibone house and sets the tone for a design that celebrates the architectural history of the neighborhood. 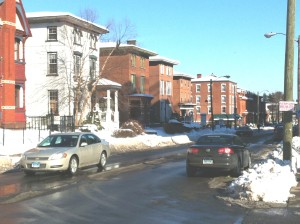 Last year saw the loss of three buildings in this area – two Italianates and the D. Newton Barney Building. The majority of the property on the north side of the street between Washington Street and Seymour Street stand vacant, including the architecturally and historically significant Levi Felt House. Preservationists are mindful that new construction is necessary to meet this century’s technological demands. We also know there are ways to achieve this AND preserve the architecture that defines the neighborhood. 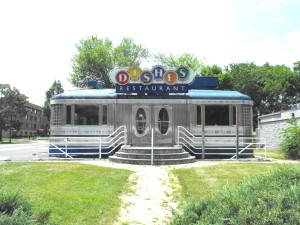 Although by far the most recognized and popular building on our 2015 Endangered Properties list, the Comet is still threatened. While the newly adopted Form Based Zoning Code guides any new construction and/or infill for this site, our municipal preservation protections would not preclude the moving of the diner to another site, including out of state. A visionary developer who sees the diner as a jewel and not a roadblock is needed to help jump start the redevelopment of this area of the Farmington Avenue Corridor.