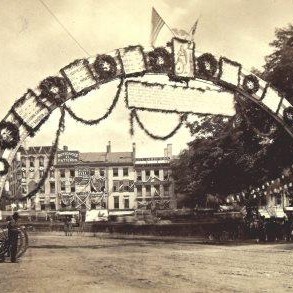 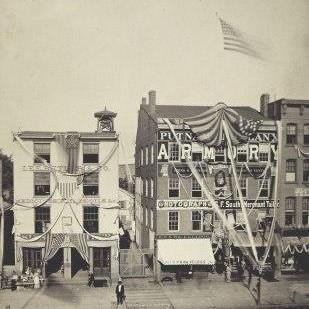 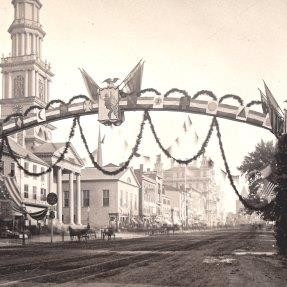 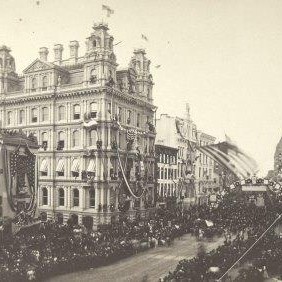 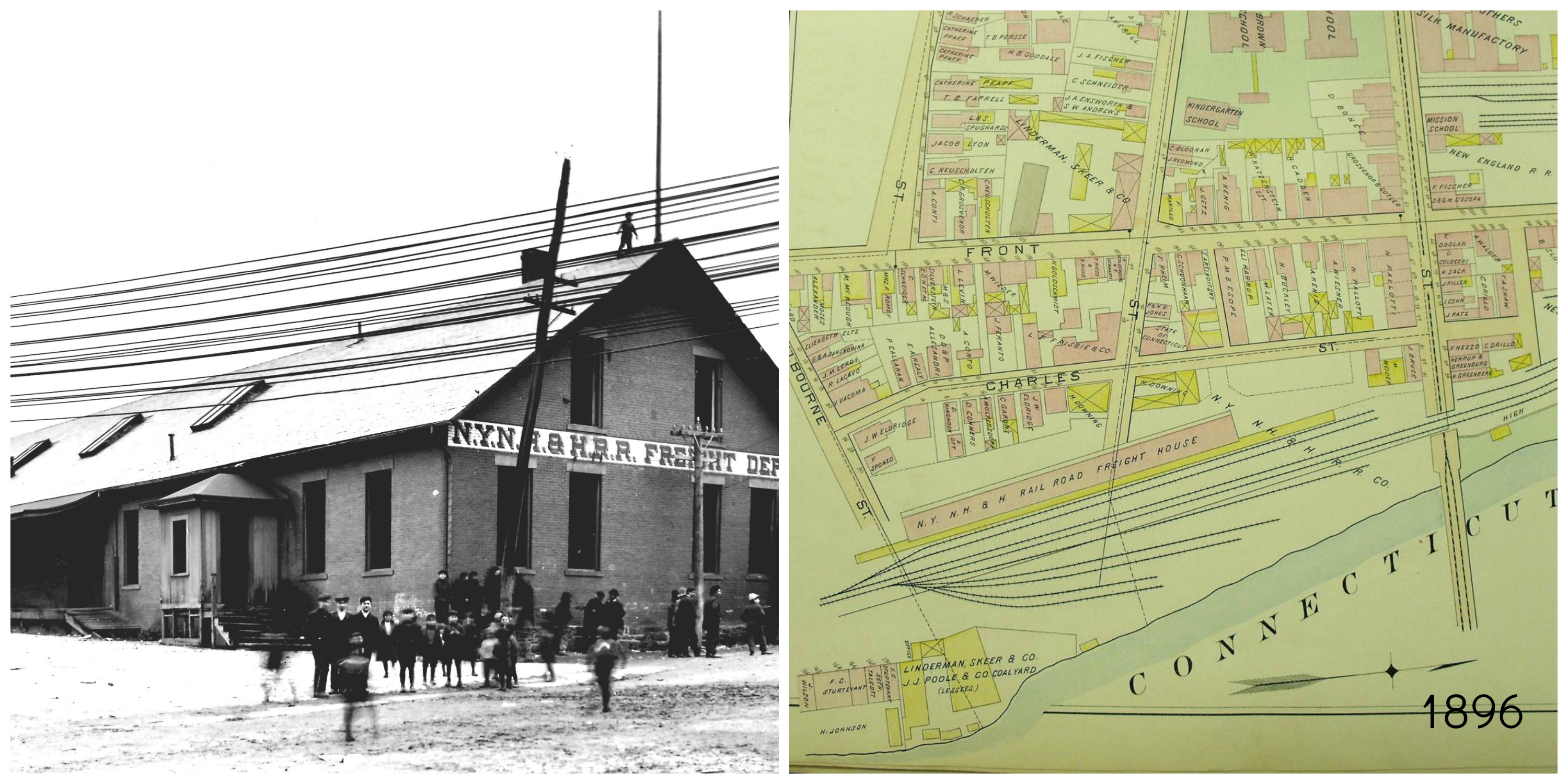 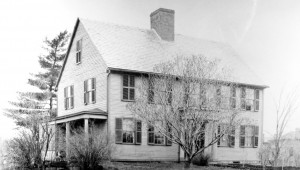 Built before the Revolutionary War, this Colonial-era house stood at the southern corner of Main and Belden before being razed for the construction of the firehouse still situated there. It was at one time owned by Major Michael Olcott, past commander of the First Company Governor’s Foot Guard and purchased in 1850 by Warren Rowley. The house received little to no exterior alterations until its destruction but was said to have been the first house in Hartford to have carpeting. And, of course, General Washington and Lafayette were said to have slept there.

The Hartford Courant reported in 1909 that an attic window still had the following inscription etched into it:

Anne Bunce
Since I must go, ’tis my lot –
Pray let me not forget.
The pleasures of Hartford I do reluctantly resign,
Since I must leave my dear Anne behind.
17731 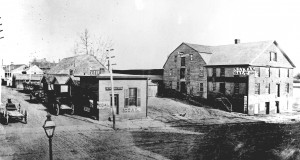 This circa 1895 photo shows the Eliphalet and Roderick Terry storehouse (on the right) at the foot on State Street and Ferry Street. To the east of this building was the dock where the rum and molasses of the Terry brother’s West Indian trade business would be unloaded (and sampled!). The buildings pictured here were demolished in 1908-1909 for the construction of the Bulkeley Bridge. (Photo source: Connecticut State Library PG 420 Taylor Collection Box 2, Item 228)

990 Main Street Through the Years

This montage of pictures spanning three centuries of the buildings at the corner of Talcott and Main Streets show us the progression of Main Street from a residential street to a commercial center. From left to right: Gov. Joseph Talcott house, ca. 1895 (CT State Library PG 400); Smith & Bassette drawing of Youth centre store (Hartford Courant Aug 1 1937); building in 2007 (Assessor, City of Hartford) 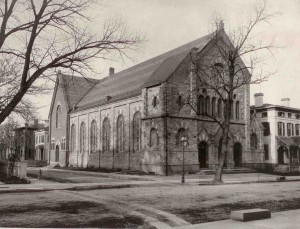 Still gracing the Hartford urban landscape at the corner of Capitol and Clinton, the First Presbyterian church was built in two stages: the Gothic chapel in the rear in 1868 and the Romanesque church proper in 1870. Both were designed by the renowned New York architecture firm of Renwick & Sands (St. Patrick’s Cathedral, Smithsonian “Castle”). The chapel was built of red brick; the main church of Vermont granite, limestone and Portland sandstone. 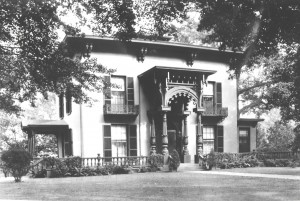 This magnificent Italian-villa was the home of wealthy merchant and banker Charles H. Northam. The elaborate and richly detailed entrance illustrates not only the wealth of the owner but that of other residents on Washington Street. Misses Mary & Ada Taylor later resided in this home where they curated and tended to their father’s photograph collection of notable Hartford buildings and homes – including this very picture. The building was demolished in the 1960’s for the construction of an office building. 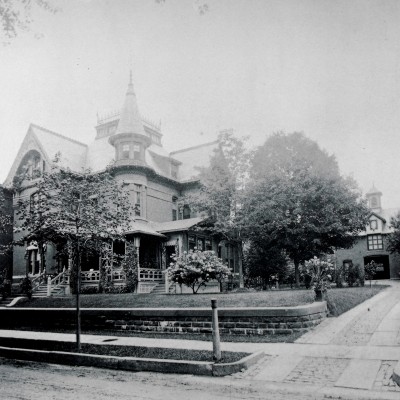 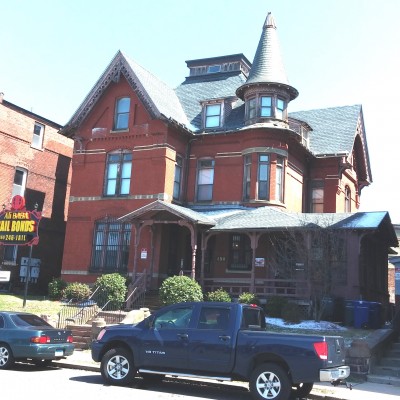 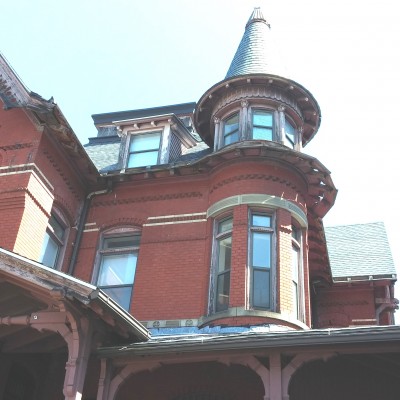 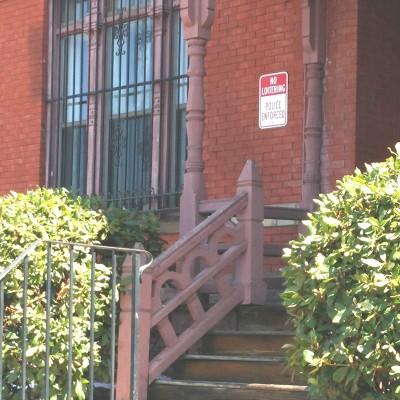 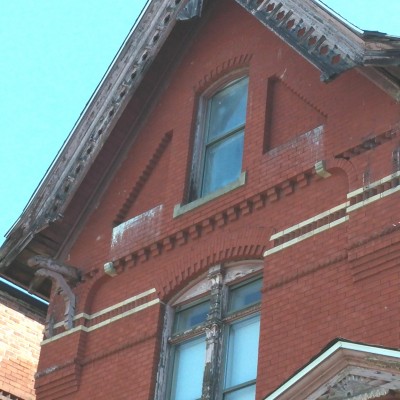 Along with its neighbor the Isham-Terry house, this Queen Anne jewel gives us a glimpse back to this once fashionable neighborhood. The home was built circa 1880 and designed by architect Seneca W. Lincoln. Although showing its age, the house still retains many of its distinguishing details. (Vintage photograph courtesy of CT State Library PG 400 Taylor Collection) 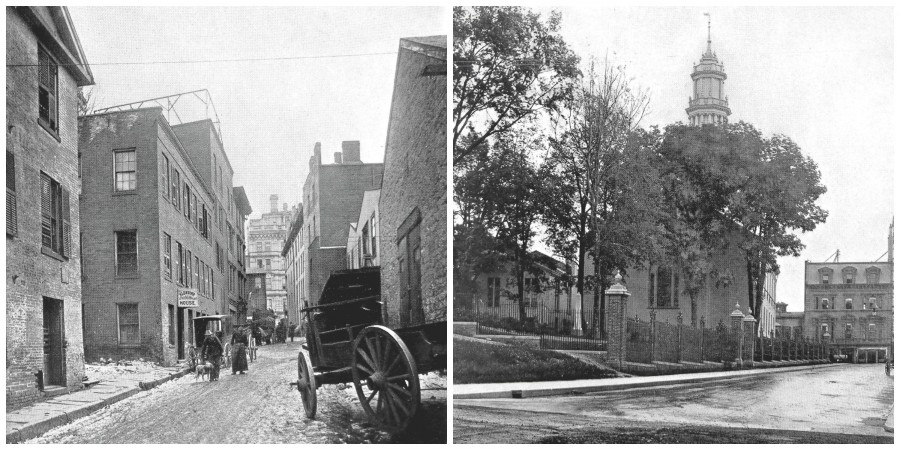 Before there was Stone Fields and the Bushnell Tower, Gold Street had a reputation for boozing and brawling. In 1896, the Ruth Wyllys Chapter of the Daughters of the American Revolution spearheaded a project to demolish the buildings on the north side of the street “to give Hartford a great lift and to show respect for the city’s proud and honorable past.”(Hartford Courant, April 17 1897) 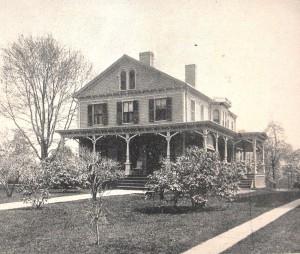 This graceful home was the residence of the 48th Connecticut Governor, the first to serve
a two-year term. As with many of the Washington street estates, the property was purchased by an automobile dealer (Packard) and demolished in 1916 to expand their business at the corner of Washington and Park streets. It is now the site of a CVS store. 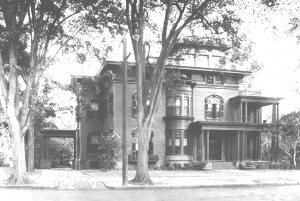 Built as an Italianate villa in 1865 for prosperous businessman Lucius Barbour, the residence was “Victorianized” with Queen Anne stylings (inside and out) in the 1890’s by his son Lucius A. Barbour. This architectural gem is one of the last surviving buildings from Washington Street’s Golden era and currently houses law offices and an apartment. 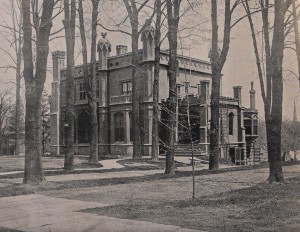 Pliny Jewell residence
140 Washington Street
Brothers Elijah & Edmund Kellogg built this sumptuous home in the early 1840’s to closely resemble an English Tudor castle they had seen and admired during a trip abroad. Built of brick covered with wood, the property was purchased in 1859 by Pliny Jewell, founder of the Jewell Belting factory.  It’s hard to imagine that when built the location was so remote that the houses were not numbered – and that it was built in the middle of an apple orchard. 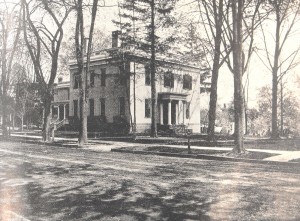 William H. Bulkeley residence
110 Washington Street
Next door to brother Morgan’s home was the residence of the president of Kellogg & Bulkeley and auditor of Aetna Life Insurance Co. The residence was razed in 1928 to make way for the Art Deco Hartford Trade School (now used for the Hartford Transitional Learning Academy). 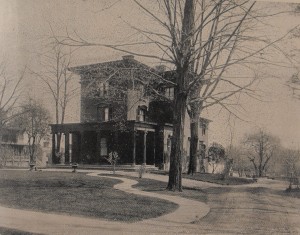 Morgan Bulkeley residence
100 Washington Street
Typical of the estates lining “Governors Row,” the Morgan Bulkeley estate included a greenhouse, gardener’s cottage and a large barn. After Bulkeley’s death in 1922, the house was the central administration office and Hartford barracks for the Connecticut State Police until replaced by the current building in 1938. For more on Morgan Bulkeley, read Jeff Jacob’s Hartford Courant article “Morgan Bulkeley: The Biggest Sportsman To Come From Hartford.” 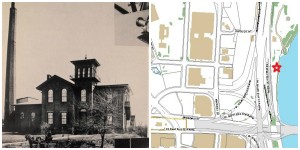 In the fall of 1855, the newly organized Water Board (now the Metropolitan District Commission) completed the construction of this pumping station on the banks of the Connecticut River, approximately due east from the end of Pleasant Street. River water was pumped from the river by a Woodruff & Beach steam engine up to the Lord’s Hill reservoir (where the The Hartford Insurance tower now stands). 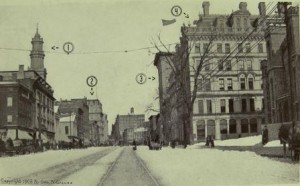 Can you name the buildings? 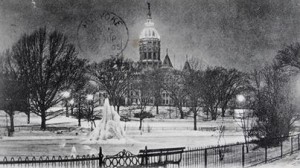 View looking north from the Capitol 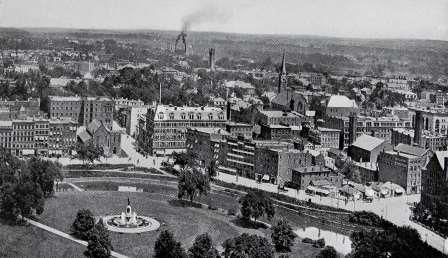 View of the Corning Fountain, the Park River running through Bushnell Park and the intersection of Asylum and Ford Streets.