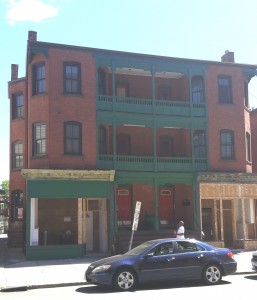 If you have paid attention to the first installment of the State Historic Tax Credit series (gee, I hope so) you realize the incredible financial power of and the unique opportunity we have in Connecticut to encourage historic preservation.  If a building is deemed historic and is vacant and abandoned commercial structure the State Historic Preservation Office (SHPO) can award a tax credit for 25% of the construction cost to rehabilitate it.  The tax credit is redeemable to provide a financial resource for development.  Connecticut is one of a few states to offer a robust tax credit incentive.

Annually Connecticut has allocated $ 30 million in tax credits for commercial projects.  In highlighting the work of the Capital Region Development Authority, I highlighted projects in Hartford which could make financial sense with the addition of the tax credit resource.  In turn this has sparked a renaissance of the urban activity so sorely lacking in downtown.  SHPO reports that throughout the State 1,515 new units of housing have been created since the program’s inception, 797 of these are affordable.  Reuse of abandoned buildings brings an economic engine to help the cities in Connecticut through sales tax on construction materials, income tax revenue for wages paid to all associated with the project; architects, engineers, workers even the coffee vendors who sell items on the sites.  Last but by no means least is the real estate value increase realized by putting a vacant building back into productive use.  Value increases the tax base on which cities generate taxes to operate.  Further, if the vacant building next door suddenly comes to life the value of adjacent properties also improves.  It is not difficult to understand that historic tax credits, as a financial development component, are an incentive of real merit.

What could possibly go wrong with this key resource?  Popularity!  Since the tax credit program was launched interest in utilizing them has increase exponentially.  As developers and investors have grown to rely on the resource demand has grown to outstrip supply.  We work on a fiscal year as do most states which means our year runs from July to June.  SHPO has already announced that the pool of historic tax credits has already committed for the next fiscal year 2017-2018!  In doing its best to accommodate new projects they have made commitments for next year.  This is not able to be sustained and so rather than issue commitments the State has now begun to issue “reservations” which are not treated the same for purposes of assembling a project.  Basically, there is less certainty.  Uncertain of the financial structure of a project causes investors to hold back their commitments.

Since historic tax credits generate financial benefits for communities a logical response would be to call for a larger allocation of these.  As we know the State is struggling with its budget which has been made clear in cuts all of us have realized.  A tax credit means a reduction in revenue to fund the State’s operation.  A profound effort is to be made this Legislative Session to increase the credit allocation.  A benefit analysis is hard to develop because so many subtle components are involved. Take for example the increase of the municipal tax base driven by rehabilitation of vacant and abandoned buildings.  Studies do not exist to make the argument that greater not fewer tax credits are an economic engine.  There are many competing needs which need to be weighed to balance the State’s budget.  Although we in the field of historic preservation feel that the argument is financially practical it is hard to get the opportunity to make the case before our legislators.

What to do?  If urban community economic development is important to Hartford, then your voice needs to be heard by our delegation.  Recall that we have 5,300 deemed to be historic properties here.  Historic tax credits for redevelopment are critical.  We need your help in simply writing a note to your elected officials to voice your support for an increase of the State Historic Tax Credit allocation.  Find your legislator